.... and so the year continues

Monday 15th:   Had my hair done by Louise and we exchanged stories about our holiday homes (sounds bettter than statics) on the East coast.  In the afternoon, the ladies I meet up with once a month assembled at the new home of one of the group.  It is a beautiful bungalow and we were treated to a lovely spread.  The stuffed monkeys or gewickelte biscuits were better than mine although the same pastry of 8oz flour, 4oz fat, 2 oz sugar and the cake with the meringue topping sandwiched together with a mixture of cream, marsacapone cheese and lemon juice, baked by her daughter was amazing.

On Tuesday I had to stay in as we were having two new double glazed windows at the front of the house.  Beats cleaning them.  Anyway, it gave me the opportunity to tackle those jobs that I so often put off such as cleaning the cooker.  I can recommend the company MJM Windows.

As the brown bin was finally emptied and my neigbours were out, I set about cutting the hedges in the drive.  The bin was soon full to the brim again.  I thought this bout of gardening would act as a good warm up for Pilates in the evening, but lets just say that some sessions go better than others.

On Friday I had lunch with my nonagenarian Auntie Flo; her treat.  I hope I'm still a lady who lunches if I reach that age.

I used some of my Tesco vouchers on a year's membership to the RHS Garden, Harlow Carr, in Harrogate which gives free entry for me and a guest to this vast area of diverse gardens, so we took the opportunity of a walk on Sunday.  http://www.rhs.org.uk/Gardens/Harlow-Carr  click on to an interesting and informative web site. 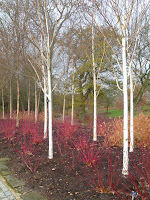 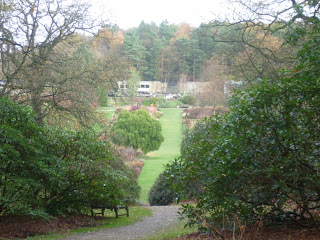 You never now what you're going to find around every corner - Doric columns, a maze, a quirky sculpture!
On Monday I accompanied Debs and her cockerpoo dog on their walk in Roundhay Park.  We walked and talked round the big lake.  It really blows away the cobwebs.  We noticed that the same jogger overtook us 5 times and I thought that our pace was quite respectable.

The next day I took the car in for its annual service and get the clock changed.  The route to Harrogate affords amazing views.  The sky was clear and blue, Red Kites soared above me and Almscliffe Crag looked majestic.  After dropping the car off at the garage, I was able to try out my new bus pass on the short ride to the centre of Harrogate.   Did a trawl of the charity shops looking for a replacement for my glass tray on which my candlesticks sit, but to no avail.  I had a coffee and flapjack at the Bean and Bud; well expensive but posh magazines to read.

Freya is out of hospital after her bout of bronchiolitis - hurray!

Although I mainly write about the good times, we all have our share of problems.  The joy that is the bonus of  being a part of a large family and big circle of friends brings with it the corresponding number of worries from ill-health, bereavements and disharmony of relationships.  We must count are blessings and celebrate the simchas.  The process of writing this blog makes me focus on the positives and be thankful for them.
Saw a great Israeli film:  Maya, at the Community Centre.
A struggling young actress lands the leading role in a theater production. She is to play the part of a girl who undergoes a traumatic experience and is committed to a mental hospital. The actress, seeking to research her character in depth, spends some time observing in a psychiatric ward. As a result she brings to the role aspects that don't match the director's take on the part - creating conflict between herself and the director.

By the evening of the play's premiere, the actress is walking a thin line between acting and madness and the end of the movie makes you wonder – what would I do if I were her?

Ellie came to play on Wednesday morning and we made a birthday card.  Went to Wetherby in the afternoon and, lo and behold, found a glass tray in a charity shop.  I'm glad I found what I wanted but the thrill comes from the search!

On Thursday I attended a play put on by the New Vic Theatre.  It was called Yizkor and portrayed life in a shtetl in Eastern Europe.  It was developed as teaching material for schoolchildren to make them aware of a way of life that was wiped out yet people still lived to tell the tale.  Some parts were narrated by a man, Ibi Ginsberg, who survived the concentration camps but died earlier this year and his wife Val, was in the audience.  They were teenagers at the time, like the characters of the play.  My maternal grandmother came from the shtetl of Vashilishok and my paternal grandparents came from Vilna Gibirne in Lithuania, although they arrived in England before the first world war.

Our first Waitrose has opened in Leeds.  It's very clean with some interesting foods including a kosher section, but very expensive for a weekly shop.

Looking at the 'hits' on my blog, I was astounded to learn that apart from the United Kingdom and Sweden (thanks Annika), other hits came from United States, Canada, Turkey,  Germany, Egypt, France and South Africa.  If any of you click on again, please let me know what brought you to read it.

My CRB check for voluntary work has been approved. 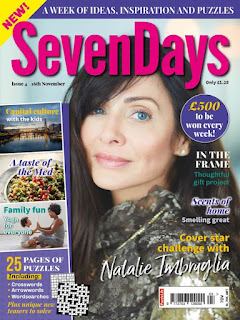