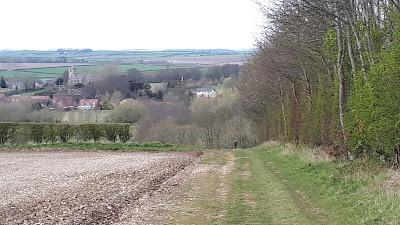 Rudston is a village in the Yorkshire Wolds in the East Riding of Yorkshire surrounded by farms. The name comes from the 25 ft monolith in the village churchyard, sometimes referred to as the Cleopatra’s Needle of the Wolds and is said to have date from the late neolithic period, possibly around 2,000BC.  ‘Rod’ means ‘rood, cross’ and ‘stan’ referred to the ‘stone’ used for the cross.

In the village stands Rudston House birthplace of the author Winifred Holtby who wrote about the East Riding, the Wolds and the Dales. Her best-known work, the novel South Riding was published posthumously and has aired on TV as a serial and has been made into a film.   The house bears a plaque which reads: “Winifred Holtby, novelist and social reformer 1897-1935, author of South Riding. The original home of the Holtby family and birthplace of author.”

Born 1898 into farming family Winifred studied at Oxford where she met author Vera Brittain.  The two were lifelong friends and moved to London where there is a plaque to commemorate both of them at No. 82 Doughty Street, Holburn.  In 1931, Winifred Holtby was diagnosed with Bright’s disease and passed away in 1935 aged 37.  She was laid to rest in the churchyard at All Saint’s Church, Rudston. 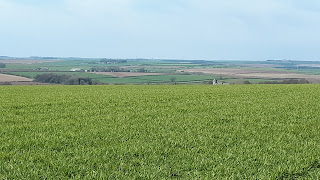 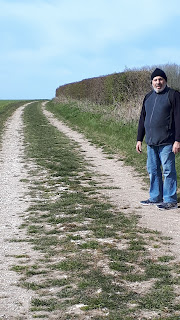 The well-described walk we went on, courtesy of the Hull Daily Mail  https://www.hulldailymail.co.uk/whats-on/whats-on-news/five-mile-yorkshire-wolds-walk-2647408 took us on a public bridle path up through woodland known as the Zigzag Plantation and on to Woldgate, a Roman road and where the artist  David Hockney observed many different seasons and recorded what he saw using his iPad and on canvas with paints.

The trail then descends by an underground reservoir and finishes at the Gypsey Race, a chalk stream which flows into the North Sea at the harbour at Bridlington. 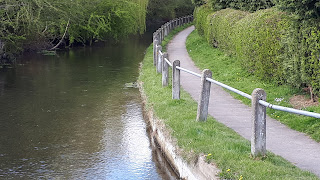 Yom Hashoah, which falls on the 27th of the Jewish month of Nissan the anniversary of the Warsaw Ghetto uprising,  is Israel's day of commemoration for the approximately six million Jews and five million others who perished in the Holocaust as a result of the actions carried out by the Nazis.

The Talmud says:  As long as someone’s name is remembered, his name will live on forever.  This evening I am lighting a candle in blessed memory of Betje Cohen who perished at Sobibor extermination camp aged 41  …. for being Jewish 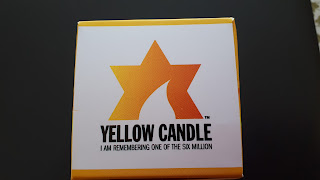 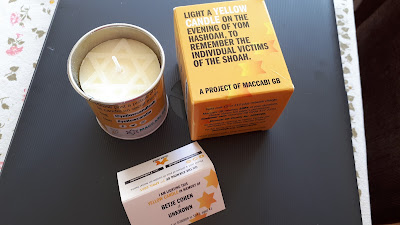 While remembering the Holocaust, I am aware of acts of oppression and atrocities still being carried out against ethnic groups today.

Six on Saturday – A trip to the Garden Centre

I had some unused garden vouchers from last birthday so I thought I would treat myself.  The items cost more than I would pay at my usual outlets but, as the saying goes, don’t look a gift horse in the mouth.

The Propagator generously hosts Six on Saturday.  Click on the link to his blog to see what he and his followers are growing and doing in their gardens this week.  Perhaps you feel you could add your own six too. 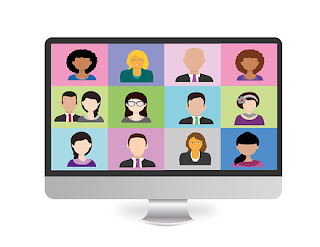 Although meeting on Zoom isn’t the best way for to communicate, there are both advantages and disadvantages to this mode of interaction.

The latest online events I have attended were from Leeds LitFest  which took place   2nd – 7th March.

I selected the following events and enjoyed each one enormously.

A Literary Quiz with quizmaster Gary Wigglesworth author of The Book Lover's Quiz Book (which would make a nice gift for a book loving friend). Questions were on first lines, characters etc  Most enjoyable but not my finest hour.

I had just read a couple of novels by Peter James  a UK No.1 best-selling crime and thriller author. He told us how he got into writing and how he shadowed police on their callouts for research purposes.  The TV series Grace, adapted from his novels about Roy Grace, is due to air on ITV on Sunday 14th March at 8 pm.

Salon with Clare Fisher gave us poetry writers/authors from and near Leeds including  Rachel Bower, Cherie Baptiste-Taylor, Sarah Perry Poet, (novelist and short story writer), Kayo Chingonyi, Kimberly Campanello and  Sarah Dawson who is studying failure in contemporary experimental poetry performance at the University of Leeds.  The poems she read out were written in universal phonetics.

Six on Saturday: Signs of Spring

We've made it to the end of February and there seems to be a different feel in the air.  A couple of degrees higher on the thermometer, a bit of sunshine and signs of new growth in the garden goes a long way to improve our mood.

Here are my six:

The Propagator generously hosts Six on Saturday.  Click on the link to his blog to see what he and his followers are growing and doing in their gardens this week.  Perhaps you feel you could add your own six too.

It was really exciting to be part of the virtual audience in the Zoom room for BBC Radio 4’s GQT with chair Cathy Clugston and the panel.  Two programmes were recorded with the panel; Matthew Wilson who had guitars on his wall, Chris Beardshaw and Bunny Guiness whose cat was luxuriating under a radiator.  The programme (episode 43) airs on 12th February and, unless edited out, mine was the first question.

In normal times, members of our gardening club are challenged to sow a pot of seeds each Spring to see who can grow the tallest Sunflower or the first Cosmos to bloom etc

Can the panel suggest which seeds they would recommend for this year’s competition, preferably to flower later on this year.  All entries will be shown at our Zoom meetings and posted on our Blog.

Interesting answers were given by all three panel members.  Tune in to find out what they were!

If you fancy being in the audience, click on the link below.

…. and if you are interested in gardening, check out our group’s blog at 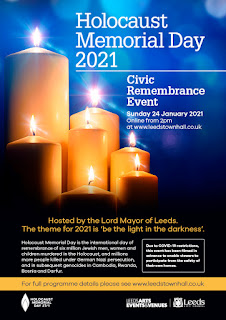 Speakers included Holocaust survivors, many of whom settled in Leeds, who related their experiences and remembering family members who perished.

“Never again” is the slogan used when we talk about the Holocaust, yet we heard from survivors of genocides which have taken place since then; Cambodia, Rwanda, Bosnia and Darfur.  We heard about the plight of the Uyghur Muslims in China and the persecution of Rohingya Muslims in Myanmar which are still happening today.

We must learn from the past to create a better future.  In the words of the author and camp survivor Elie Wiesel who experienced the unimaginable events of the Holocaust, “Whomever listens to a witness becomes one themself”. For me, this means we must not stand by and allow such oppression in our lifetime.

Rudston is a village in the Yorkshire Wolds in the East Riding of Yorkshire surrounded by farms. The name comes from the 25 ft monolith in t...