Set off for our annual Autumn trip to Northumberland one week later than usual as we are no longer tied to half term holiday.  We took the A19 rather than the A1 and stopped off at Hartlepool where we exchanged some clothes at their M&S in the city centre indoor shopping centre.
We arranged to stay in the Longhirst Hall Hotel (and of course Golf Club) near Morpeth, which is lower down than our usual visits.   http://www.longhirst.co.uk/ which, apart from an initial smell of drains in the room, suited us very well.

Although cold and windy, we followed the Art Trail in Newbiggin on Sea, or at least half of it before it got dark. 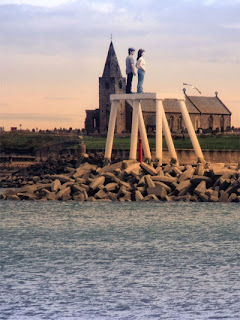 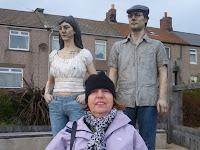 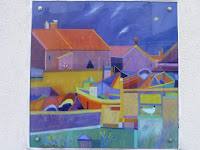 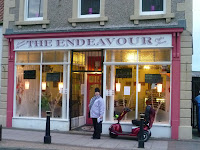 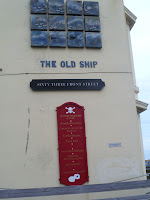 Returned to the hotel for a rest and a read (me the second novel of the Millennium trilogy by Stieg Larsson The Girl who played with Fire and Ronnie:  Paul Auster The Book of Illusions) and, after a meal in the spacious Szoda Bar and Kitchen with its good food, friendly service and fair prices, we slept like logs.

We breakfasted well.  Although there was no muesli, no granulated sugar for Ronnie's cereal and porridge only on request, the hotel provided yoghurt, fruit and danish pastries along with the usual offerings at the buffet.

We set off to find Bolam Lake as the sky was blue, but decided that the heavy overnight rain would make the ground too wet for the walk.  Passing by a river, Ronnie spotted a heron.  We stopped to get a closer look and the heavens opened.  Look closely to find the heron in this picture!
We ambled through Amble finding a surprising variety of shops in the main street.  Managed to find the Kitchen Devil knife I had been seeking for months, an internal cover for the letter box and a small clock.
We braved the gale force winds and passed the marina a walked to Warkworth for lunch. 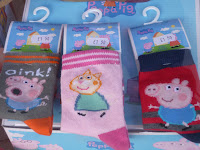 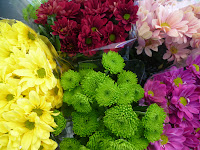 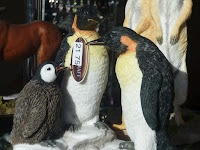 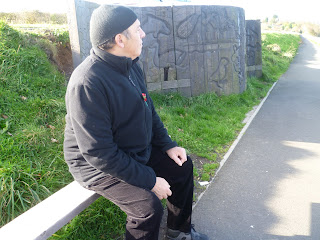 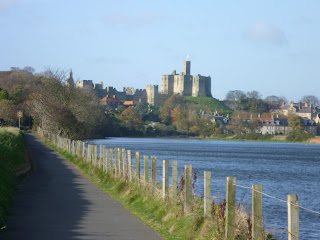 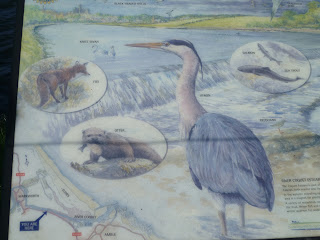 As we walked along the riverbank we saw cormorans fishing.
In the afternoon we visited our old haunts of Seahouses and Bamburgh.  Went for a coffee in Alnwick, named by Country Life as the best place to live in Britain. 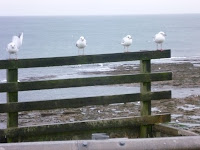 That night we ate at Gianni's Restaurant in Morpeth which was surprisingly busy for a wet and windy Monday night  http://www.giannis-ristorante.com/   where we had a delicious bowl of pasta.

The next day we visited the new shopping centre at Morpeth, which was opened a year ago by Joanna Lumley
http://www.sandersonarcade.co.uk/page/1/Home.html.

We made our way home via the Metro Centre at Gateshead but Ronnie was all too soon all shopped out.
at November 14, 2010