End of August at caravan

Spent a lovely few days with Louis and Ellie.  Their presence ensures the ducks get a good feed!
We did the Rickaby Woodland walk at Ulrome where we found a wide range of species of trees and bushes but the blackberries had all gone.  We were told that deer were found here but found no trace.  Large numbers of Canadian geese were gathering in nearby fields in preparation for migrating to warmer climes.  A sure sign of the end of summer.

Bridlington's Pembroke Gardens have been redone at vast, probably EU, expense.  There are stone seats and screens of glass with backgrounds of leaves or rope which gives them a mucky appearance.  The designers wanted to plant shady trees but scrapped that plan after hoteliers complained that sea views would be lost.  Even so the solid wall to the front opposite would mask the sea view if sitting down, although I haven't tested it out yet.
Next day we arrived at South Bay Park and Ride, Bridlington, where we were given a free ticket by a departing motorist which gave us free return travel for all of us by bus or little train.  Bargain.  We took the bus which is a novely for all of us.
A trip on the Pirate Ship which is advertised with a statue of Captain Hook took us out of the calm waters in the harbour into Bridlington Bay where the sea was rather choppy.  On reaching dry land Louis said 'that was awful'! 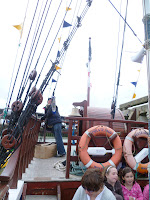 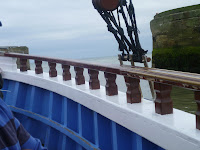 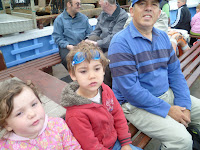 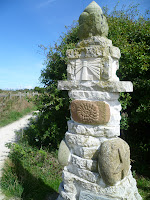 We spent the following day with a picnic at Flamborough South Landing following the sculpture trail.  Fantastic views.  Cafe burnt down last July but the temporary toilets are clean. 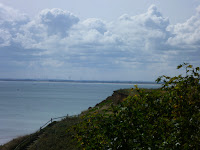 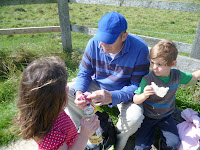 Naomi came up overnight and we had a nice meal at the Italian as road was blocked after a fatal accident and the booked customers couldn't get through.
Naomi took the children home for a party and we set off to Filey to join Janet and her family.  Filey hasn't changed so parking was a nightmare.  Had a nice lunch at the 5 Leys situated on the front where we stayed in a flat as kids at Undercliffe Holiday Flats,12a The Beach, just refurbished and £625 p w in high season for the 3 bed one (wonder how much we paid).  The twins went on the roundabouts and we went to the beach before being rained off, much to the disappointment of the twins who were showing construction skills.  Looked for a cafe for afternoon tea which was surprisingly difficult to say it was Bank Holiday and the gift shops were also shut.  Carr Gate Hill was just as steep although one way now.  We tried the Belle Vue Hotel which reminded Ronnie of the old Vilna Shul, and had to settle for a run of the mill cafe (Bronte Vinery) which boasted a 300 year old grape vine growing along the ceiling.  Pity they couldn't boast about their services.  Must visit the Brigg next time.  A good day out. 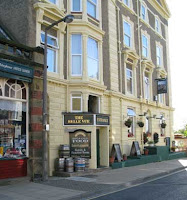 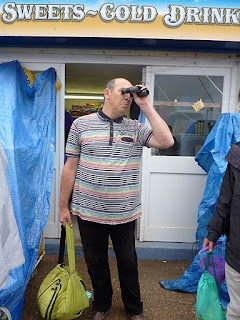 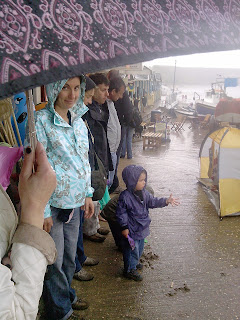 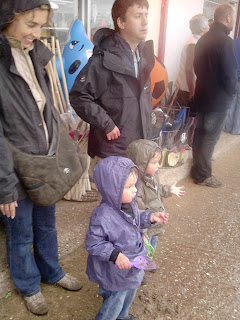 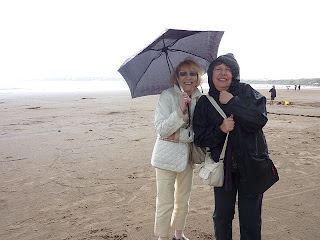