Holidays must come to an end and we are missing Freya but lucky to live so close to our other grandchildlren.
Sunday lunch with Janet.  What a day for mishaps!   It absolutely poured down and Janet arrived later due to the state of the M62.  Beryl found she had lost her purse so dropped Vanessa, Janet and me off at Napa Bar and Kitchen while she retraced her morning to find her purse.  By this time we were starving and started to order only to be told that the gas had just gone off.   Well the outcome was better than we expected.  A lady had found  Beryl's phone in Tesco car park and handed it in.  Everything was still in it although soaked through from the rain.  However it restores your faith in human nature.  We managed to find something on the menu which didn't require gas and the chip maker was electric! 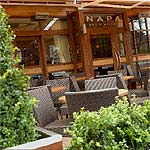 Monday morning and the rain had cleared.  Everyone else was at school and work and I went for a walk to the park, which made me really feel retired.   The bright red virginia creeper on the wall of the Canal Garden was a typical feature of Autumn.

How did I ever have time to go to work?  This week I have had do see to Nails, Optician, Hair, Dentist, kids, gardening, cooking and cleaning.
at October 20, 2010