June and July; wow how time flies when you're enjoying yourself.

Did I mention I have just read Jo Nesbo's The Devil’sStar; a kind of norwegian Girl with the Dragon Tattoo?  I am now reading History of Love by Nicole Krauss.   Leo Gursky is just about surviving, tapping his radiator each evening to let his upstairs neighbor know he's still alive. But life wasn't always like this: sixty years ago, in the Polish village where he was born, Leo fell in love and wrote a book. And though Leo doesn't know it, that book survived, inspiring fabulous circumstances, even love. Fourteen-year-old Alma was named after a character in that very book. And although she has her hands full--keeping track of her brother, Bird (who thinks he might be the Messiah), and taking copious notes on How to Survive in the Wild--she undertakes an adventure to find her namesake and save her family.
The novel was inspired by the author's four grandparents and I think it  is being made into a film too.

I was blown away by the gardens at Chelsea this year although I was too late for tickets and had to watch on the television.  Really inspiring.

Freya leaves the country, but not before losing a shoe.  Broken tooth required painful dental work and more to come.  Bad thing usually come in threes .....

Made a fabulous, fattening cheesecake for Shavuoth, though I say so myself. Took the kids to the children's service where they were treated to icecream.

Sean had a holy communion/8th birthday garden party where we enjoyed chatting with the neighbours.  As it turned out that was the last dry day for a while.

Grandchildren back at school (Hurray!) and I had to take Ellie to the nurse for a booster, which didn't go down well.

Celebrated my birthday at the caravan with special guests visiting for the day.  Weather not too good but managed a ride out to Bridlington.

Went to see some of the Chelsea exhibits by Leeds City Council, now housed permanently at Roundhay Park.

and seeing Harlow Carr at its peak
﻿
We had a lovely family weekend attending some of the events at the International Jewish Performing Arts Festival held at the Northern Ballet, Leeds.

The play 'They came to Leeds' is set at the end of the nineteenth century and Leeds is throbbing with the influx of Eastern European Jews fleeing the pogroms that are destroying their communities.


In Avram Behr's yard, in Bridge Street, preparations are underway for the wedding of neighbours and childhood sweethearts, Jack Simon and Rose Benjamin.

But not everyone in Leeds views the influx of Jews as a positive move and the celebrations are threatened by violence on the streets.

A classic from the pens of Alec Baron and Louis Saipe, this play was first produced to great acclaim in 1950 and brings to life a colourful and uplifting period in the city's history.

This production was adapted especially for the Festival by Harry Venet as a part of the celebration of '150 Years of Jewish Life in Leeds' and directed by Alfie Israel and none other than my nephew Simon Glass, who also played the bridegroom, Jack Simon.

It was very well received and we all went off to eat a huge amount and, in some cases, drink a huge amount, at Casa Mia in Millennium Square 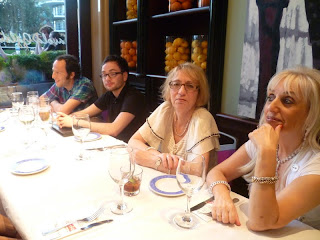 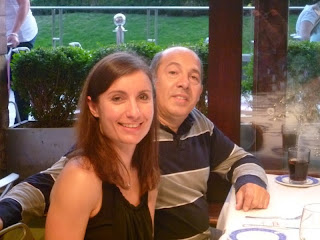 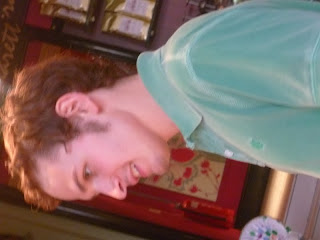 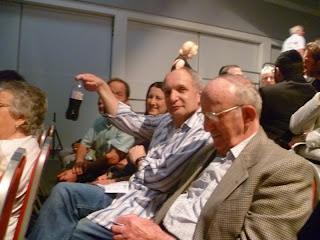 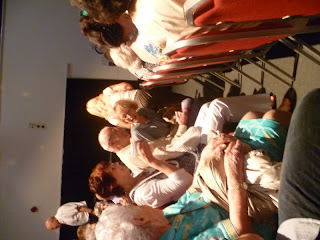 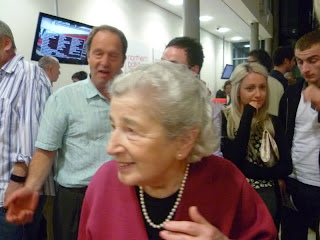 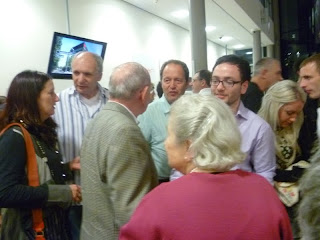 The next night there was a short film 'Where Have All The Bagels Gone?' by The Zone's Young Filmmakers, decrying the complete loss of jewish bakeries in Leeds.
This was followed by Simon's film and starring many of my relatives and Ben, dressed as a polish immigrant. The film tells the story of a community at a cross-roads, as it celebrates its contributions to a city, whilst preparing to face the challenges of the future.  It certainly made the audience reflect on the future of the Leeds Jewish community.


150 years after escaping poverty and persecution at the hands of the Russian Empire, the sons and daughters of the Jewish immigrants who settled in Leeds are preparing to face their toughest challenge yet. Once housing the largest proportion of Jews in England, the face of Leeds' Jewry has changed dramatically over the past few decades.

Charting the history of the Leeds Jewish community from the slums of the inner city, along their social and economic climb to the leafy suburbs of Moortown and Alwoodley.


Super weekend at Dave and Jacky's at Clapham.  Although retired from providing accommodation to the public, no hospitality could have been better.  Excellent food, convivial company and perfect weather.
Clapham is situated at the base of Ingleborough mountain one of  theThree Peaks.
Running through the village is Clapham Beck which is fed from Fell Beck which starts on the slopes of Ingleborough and sinks into Gaping Gill, England's highest waterfall, where Fell Beck drops 110 metres vertically down a pothole, and exits via Ingleborough Cave into Clapham Beck.
Above the village is a man-made lake built and expanded in the 19th century. This provided pressure for the water turbines and the drinking water supply, while the outflow fed an artificial waterfall at the top of the village.

Alan Bennett has a country cottage in the village. The notable botanist Reginald Farrer (1880-1920) was born and lived in Clapham.  Up until 2000 the Dalesman magazine was based in the village.

Based in the village is the Cave Rescue Organisation which serves people and animals above and below ground across a wide area of the Dales.

We took a stroll through the woods towards the caves.

We saw a performance by the Harrogate Gilbert and Sullivan Society who sang various songs from well-known musicals in the first half followed by Trial by Jury which the cast enjoyed just as much as we did.

We watched Dave bell ringing; the only jewish campanologist that I know of!  Very interesting.

We all agreed it was a weekend for the memory box.

The beautiful weather continued as we made our way through the stunning countryside of the Trough of Bowland, known as Lancashire's hidden gem, before descending to Morecambe Bay and a scrumptious afternoon tea at the newly renovated Midland Hotel.


Judged some amazing entries for Yorkshire in Bloom this week; it is a real privilege to get to see some of these gardens.

On the way to the coast we stopped off at Aldby Gardens Plant Centre which is situated in a Victorian Walled Kitchen Garden at Buttercrambe near Stamford Bridge. It once served the large country estate house Aldby Park.   Full of interesting plants and quirky art work and artifacts, Ann Lloyd, the proprietor, told us of the history of the estate and of her father, James Lloyd, who had work in the Tate Gallery and mentioned many well known artists who he knew well, for example Lowry.

My plan was to write a blog for a year and doesn't time fly when you're having fun?  I have completed much of what I set out to do, and more.  However there are still many ticks to complete on my wish list.

My thanks go out to all those people from countries all over the world, if the stats function on my blogger dashboard is to be believed, who have taken the trouble to read my thoughts.

Comments and other forms of communication are, as always, very appreciated x
at July 22, 2011