Enjoying myself as if it's my half term

Although I don't officially have a half term holiday, the grandchildren do and I feel lucky to say that this involves me, even if my front room resembles a playgroup as the weather isn't good enough to play outside.

Went to see an Israeli film The Wisdom of the Pretzel.  As always, I enjoy these films that portray characters with warts and all.

The weather has improved and the temperature climbed to double figures.  We took the children to Harlow Carr where we followed the Bugs and Beasty Trail successfully and participated in the mini workshops on the way round.  We thoroughly enjoyed the morning and the volunteers had provided activities which were great fun for both children and adults.  We ate our picnic sitting on a bench watching the world go by.  The RSPB volunteers had provided binoculars in the hide where we say siskins.  Couldn't help showing off and mentioning that we had been visited by a flock of lapwings and, since then, we have had a red kite soaring over our garden.  A wannabe twitcher or what? 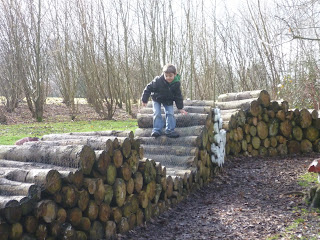 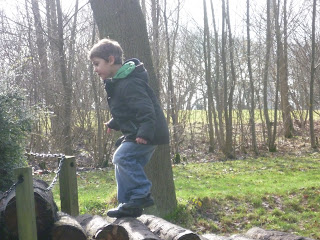 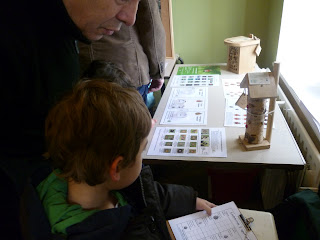 Caught up with an ex-colleague, Tom, who is now 77 and looks fine.  Since his wife passed away a few years ago he has written a biography entitled A Game of Two Halves which refers to the 37 years spent as a catholic priest followed by the 37 years as a married man, stepfather and teacher of english. 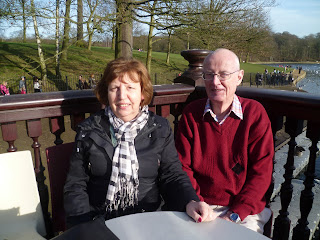 Tom was a keen gardener and I still have the honeysuckle given to me as a cutting, but alas no longer the fuchsias.

Exciting news;  I have been accepted on a training programme to be a Britain in Bloom judge!  This has spurred me on to get to grips with my garden.

The purple crocuses, purchased in Woolworth's decades ago, still do me proud.
I had forgotten about the elephant's ears I acquired from an ex-colleague last spring and an oriental poppy I planted and is now developing well.  I replaced the polythene greenhouse which was destroyed in the winter gales so I can get on sowing some seeds.  This means the geraniums I keep from year to year seem to have perished, but I will give them the benefit of the doubt.

It is noticeably lighter in the evenings now.


Went to the 'opening night gala' of the Leeds performances of the UK Jewsih Film Festival at the Cottage Road Cinema.  The Cottage Road Cinema is the oldest cinema in Leeds and one of the few remaining independently run cinemas in the country.  It is now owned by the Northern Morris chain who also own independent cinemas located in Skipton, Keighley, Ulverston, Elland and Windermere.

The film, a good comedy called The Yankles was reviewed by Katie Taylor, in the Jewish Chronicle November 16, 2010

It is a true comedic sight as an army of Yeshiva student baseball players, dressed in their uniform black and white suits, march on to the baseball pitch, with Tzizit hanging freely and Payot tumbling from their baseball helmets.

A rather misfit group, they are led by Rabbi Meyer who coaches his team religiously through a How To Play Baseball book, and as The Rebbe of the Yeshiva says, ‘there is nothing you can’t learn from a book!’

The squad seems all but a joke until Elliot, the captain of the Yeshiva team, convinces disgraced ex-baseball star Charlie Jones, to coach them. An ex-con after a series of drink driving offences, he coaches the team as part of his community service.

The interplay between the Yeshiva students and Charlie is charming. As the two cultures collide and try as it were, to play ball, the film oozes humour and comic satisfaction as Charlie learns his Shmucks from his Tuches!

The comedy is however subdued by the more serious involvement of Elliot’s father, Frankie Dubs. Played by Happy Days star, Don Most, he is embittered by the fact his son has joined a Yeshiva and given up his previous life as a future baseball star. The film raises the issues of how religion can fit into the secular world, and the idea of marrying outside the religion, as Elliot’s sister, Deborah, struggles with her relationship with Charlie.

These more serious moments in the film, are sometimes cringe worthy and hinder the films success. Elliot’s father is a stereotype of the self-hating Jew and sport fanatic father, and his drinking partners are no better, as the actors try to portray an anti-semitic tone, throwing a barrage of abuse at Elliot.

Its cringe-worthiness is magnified due to the quality of the acting, which is questionable from some of these more minor characters. Whilst watching, it became even more embarrassing when poor acting skills emanated from the major character too. This, together with questionable editing skills, hinted to the film’s shoe string budget, as a screen-wipe made its way across the audiences’ vision to signify a new scene.


The film could have also been slightly shorter, and from listening to audiences comments, was a little too long for a comedy.

The films true glory occurs towards the end as you begin to enter the world of the Ultra-Orthodox Jew and begin to see it in a new refreshing light.

Email ThisBlogThis!Share to TwitterShare to FacebookShare to Pinterest
Labels: siskin, The Yankles