Each year we like to visit old haunts and find new places.  This year we had our new puppy with us so had to think ahead.

We arrived at the dog friendly Schooner Inn at Amble, an old pub perfectly located between sea and park. Amble is a former mining town which once had railway links to the Northumberland coalfields making the town a centre for the sea transport and export of coal. The former station is now a private dwelling and the industrial workings are now Paddlers Park. It still has a working harbour and a marina.  Over the decades, we have seen it grow into a popular tourist resort.

The pub was an old building and I found that Thomas Weir Innkeeper 1881 was mentioned here Amble Inns, Pubs and Drinking Establishments of the 19th Century. (fusilier.co.uk) 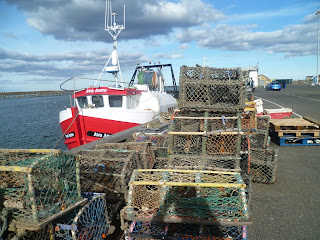 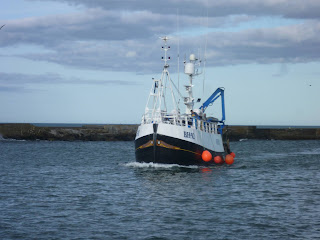 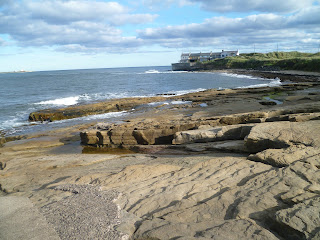 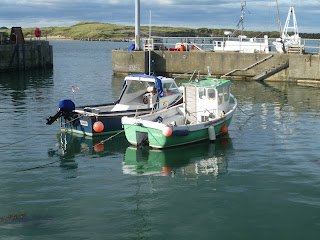 A new spot we found was Low Hauxley beach which is reached through the sand dunes.  Dolphins could be spotted just off the coast as could the bird reserve Coquet Island. 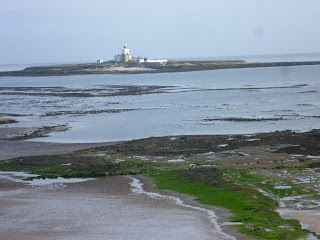 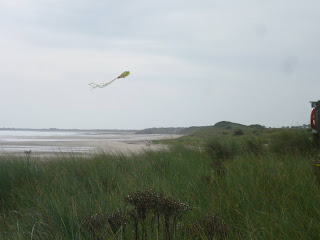 On to Alnmouth where we found the lovely, dog friendly Village Tearooms. Walking across the beach we saw a camera crew filming Kate Humble who was standing by a sand drawing but didn’t get too close in case the puppy spoiled the installation! 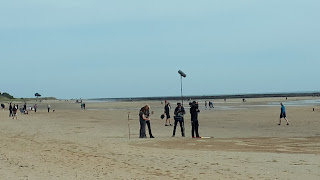 On to Seahouses for lunch.  We ate our sandwiches by the harbour where benches are arranged like a theatre. 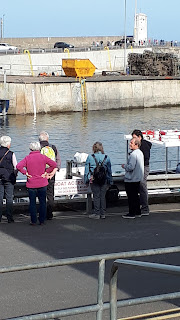 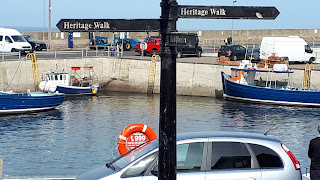 The weather was glorious and the village of Bamborough with its beautiful beach was heaving with tourists so we gave it a miss this time.  We drove to Budle Bay but the tide was in so no birds to spot.  We did see many formations of geese coming back from Russia.  They are very vocal.

On the way back to the hotel, we found a new beach by taking a narrow road just before the bridge at Warkworth.

On our return journey we stopped at Newbiggin by the Sea, well known for its sculpture “Couple" by Sean Henry. This large (12.25 x 21 x 6 metre) sculpture was installed on 17th August 2007 with a smaller sculpture, "Land Couple", looking out at the larger couple out at sea installed on land in November 2007. 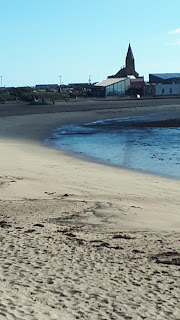 There is a lot of history here. It was Northumberland's favourite seaside town in the Victorian era. In 1869, there were 142 cobles (fishing boats) in Newbiggin-by-the-Sea. Newbiggin Colliery was opened in 1908, closing in 1967, but at its peak in 1940, 1,400 men were employed there.

Newbiggin by the Sea Mechanics Institute, Northumberland founded Aug 1891. On the premises were reading, smoking, games and billiard rooms. It also housed a public library established by a Miss Fraser with 2,000 books. 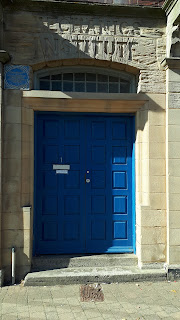 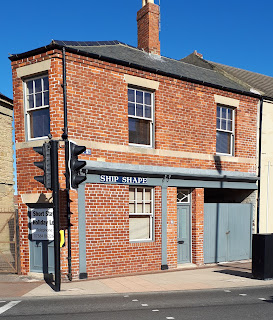 On our way home we stopped at Barnes Park, Sunderland for a picnic lunch.

We always enjoy our visits to Northumberland and have experienced flood, snow and gales.  We thoroughly enjoyed ourselves again this year; the wonderful weather and a well behaved puppy being the icing on the cake.