Lists in my life 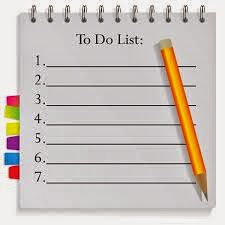 This was the title of my autobiographical piece for this month’s local radio programme and I include parts of it here.  I was under the impression that everyone made lists, perhaps not as ardently as I do, but lists nevertheless.  How else can you remember everything you need to do?

Lists have and will play a significant role in my life.  As a child of the 50s, education required learning by rote.  This included preparing for the 11+ exam using a text book called “First Aid in English”.  This book contained lists of, amongst other things, similes, antonyms, synonyms and group terms for animate and inanimate nouns such as a bench of bishops and a clutch of eggs.  Quizzing each other from this book was considered fun in our household before we got a television!

Lists continued to be a factor in my life in the form of to do lists, shopping lists and packing lists; packing lists for weekends, main holidays, UK or abroad.  At work or at home, my day begins with a list whether mental or written.   Some of you will be thinking I suffer from OCD, others may think I am super efficient, when in fact I am neither.  I seem to live in organised chaos and items on the daily to do list such as wash the kitchen floor and tidy out the porch are frequently carried forward several times.   Listless I truly believe my life would be reduced to total chaos.
I have recently found an exciting new app for my laptop and phone which allows you to, quote, bring your life's work together in one digital workspace.  I still prefer a pen and paper which gives me a feeling of security plus the satisfaction of ticking off the completed items on the list.
The media are increasingly using the technique of the listicle aimed at an audience that they believe can’t manage to concentrate on much of anything.  The listicle is an amalgamation of a list and an article so, for example, a heading, such as “5 must-haves for the fashionable woman this Spring”   would be followed by five bullet points, each of which would be fleshed out with further explanation and detail.

How much do lists play in your life?