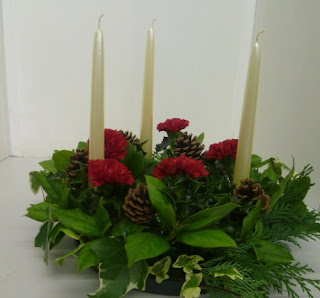 and, to my utter astonishment, I was presented with this beautiful silver cup for best newcomer!  I was really chuffed as this is the first trophy I have won in my life. 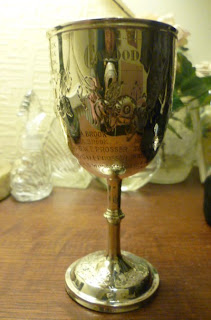 John Hobson gave a fascinating, illustrated talk entitled Curious Yorkshire.  I thought I was pretty clued up on this part of Yorkshire, but he proved me wrong.

From coast to moors and inland towns, he told us tales from the area, some to be taken with a pinch of salt.  If you are local and have the opportunity to hear John speak or visit the area, you will be enthralled.  Here is just a taster.


The talk began with the birthplace of Captain Cook, Staithes, where the women wore special padded bonnets to protect the head when carrying baskets full of mussels for fishing bait. Each day they would make up the bait with the mussels and attached them to a fishing line for the fishermen. The bonnet, gathered at the neck with a frill to allow the water to run away, differed according to the age and marital status of the person who wore it. 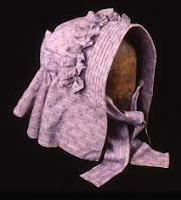 At nearby Port Mulgrave where the cobles (pronounced cobbles), replicas of the Viking boats, are still used for fishing.

The ancient Mulgrave Castle was once inhabited by the Maharajah Duleep Singh who was a great favourite with Queen Victoria. This much is true, but the well known story of how the Indian prince built a road so he and his entourage could travel from Sandsend to Whitby on the backs of his elephants without the animals getting sand between their toes could well be a tall tale.

And on to Whitby, home of Bram Stoker's famous story, which is steeped in history.  If you can climb to 199 steps, the church, its graveyard with a pirate's grave and the jade stone at the foot of the three tiered pulpit for adulteresses (as opposed to adulterers!)to sit during the service, is absolutely fascinating.
And the talk continued with the abbeys of the region:  Fountains Abbey claims the oldest flush toilets in the country, Jervaulx with its ancient embalming stones, Bolton Abbey for the carving of the dog which inspired nursery rhyme Hey Diddle Diddle and Grace Priory where the monks took the vow of silence and lived pretty much as hermits and their vegetarian food was delivered to their cells through a right angled tunnel so no interaction occurred.  That has a certain appeal for short periods of time if a laptop was included in the deal.
As I said, this is only a taster.

On television I am enjoying the Last Tango in Halifax written by Sally Wainwright with main parts played by Anne Reid, Derek Jacobi, Sarah Lancashire and Nicola Walker and I am intrigued by a new drama The Town.

Maybe I should be exercising while watching!

Celebrating Chanukah with family and friends.  Made my best potato latkes yet.


My gifts included an everyday watch and some pieces of wood for a project I have in mind.